UNWIND: Man and the moonrise

A small, family-operated craft distillery in Rabun County is poised to make a big splash in the world of artisanal whiskey. Moonrise Distillery is not just another company seeking to cash in on the growing craft distillery business in Georgia. It’s a family affair that takes whiskey-making...

A small, family-operated craft distillery in Rabun County is poised to make a big splash in the world of artisanal whiskey.

Moonrise Distillery is not just another company seeking to cash in on the growing craft distillery business in Georgia.

It’s a family affair that takes whiskey-making back to its roots, using locally grown ingredients and techniques that would make the moonshiners that used to ply their trade in the nearby hills and hollows proud.

“Our motivation is to make the best upper one percent bourbon and rye we can possibly make, and use local ingredients whenever possible,” said Doug Nassaur, who operates Moonrise with his wife Jennifer and son CJ. “One hundred percent of the corn—which is 80 percent of the product—is grown locally. We use an heirloom white Silver Queen corn that’s one of the best corns you can get. It probably costs three times as much, but it produces a much, much better product.”

Moonrise rye whiskey has been recognized as one of the top 25 rye whiskeys in the country. They recently earned a 96 and a 94 rating from Tasting Panel magazine for their bourbon and rye, respectively.

“That’s almost unheard of for a craft distillery,” Nassaur said. 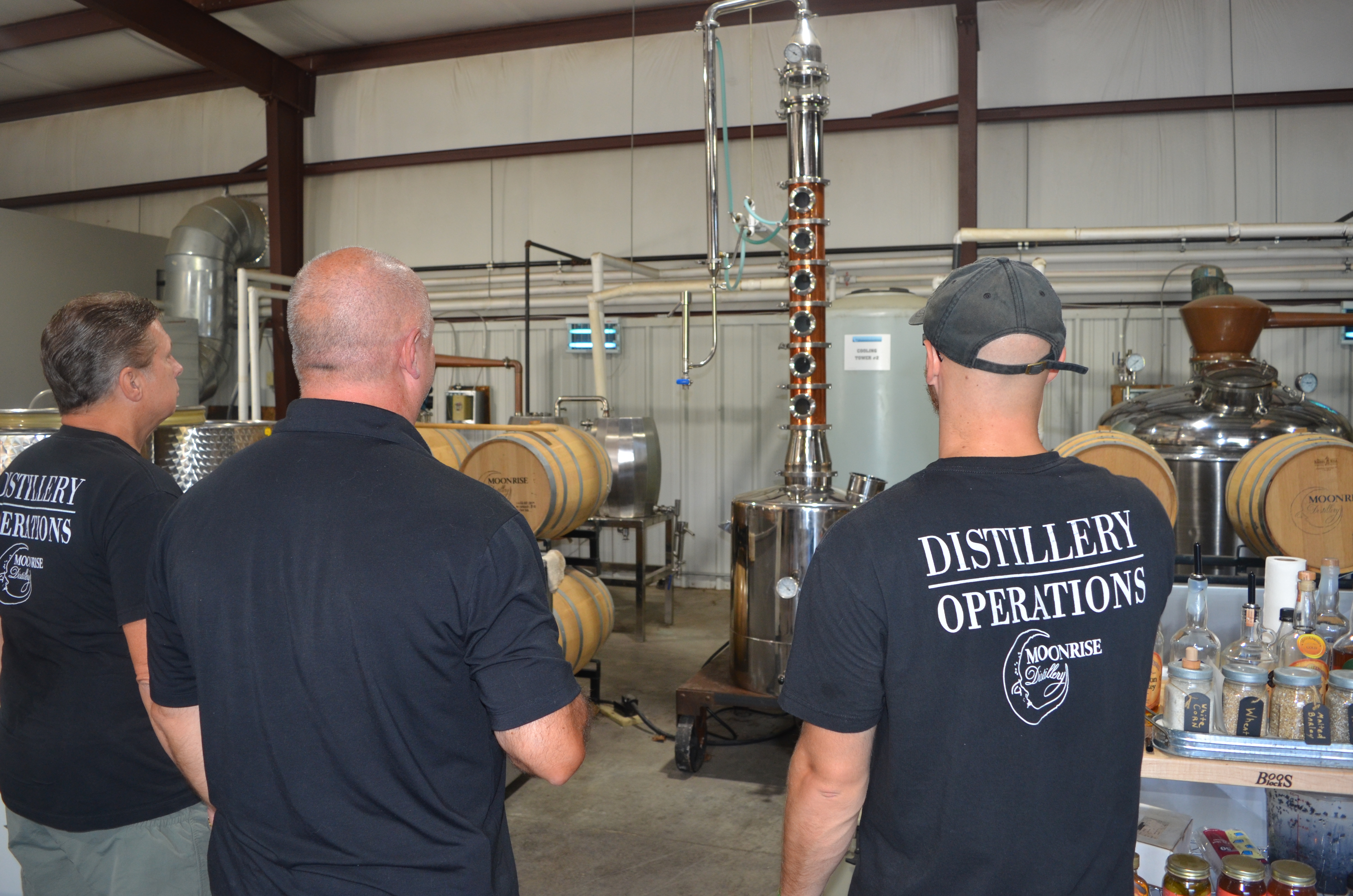 Local ingredients are one of the keys to success, Nassaur explained.

“That’s one of the beauties of being up here,” he said. “The access to natural products. The water that you have here is the same as you can get in Kentucky—limestone-filtered. Limestone is important because it takes the iron out. Iron is Public Enemy No. 1 to a good bourbon.”

But the attention to detail and the family touch are just as important, he added.

“When we say we are handcrafted, we mean it,” he said. “Every day we try to be true to the spirit of the people who came before us. We are unapologetically old-fashioned and admittedly inefficient.”

Doug and CJ hand the distilling of the spirits. Doug conducts the tours and Jennifer handles the gift shop and everything else.

“Nothing is more interesting than doing this as a family,” Nassaur said. “Nobody takes better care of the product and the business than the family.”

Moonrise was founded in 2012, but it’s been under the current ownership for just a little over a year.

“We took (the original) three products, and now we have 13 products,” Nassaur said.

In addition to bourbon and rye, the product line includes vodka and gin, with plans for a fortified wine offering, made using local wines in the near future.

There are also food products, ranging from a barbecue sauce made special with the help of the same charred oak barrels used to age the whiskey to beef jerky and … believe it or not, ice cream.

But there’s more to Moonrise than just the food and beverages.

The new owners have spent the past year making improvements to the property designed to enhance the experience for visitors. A performance stage has been added along with an artificial grass surface in front for spreading out during the weekly musical performances.

Moonrise also offers tours that are attracting thousands of visitors every month.

“When I wrote the business plan, I titled it ‘Gilligan’s Island,’ because I wanted to create a place where people would want to come for a three-hour tour,” Nassaur said. “A distillery is a living, breathing organism. There’s always something going on, there are sights, smells and tastes to share.”

The community support has been overwhelmingly positive, Nassau said.

“The amount of effort that people have put into welcoming us into this community has moved us,” he added. “We are surrounded by people who care. We get to share the things we are passionate about with people who care. What more could you ask for?”

While future expansion, including a second barrel house, is on the horizon, Moonrise will always be a manageable size by design.

“We have made a conscious decision that we are not going to grow beyond a point where we can’t touch each one of our customers,” Nassaur said. “When we have visitors here, we try to demonstrate to them that a craft distillery can make products as well as the big guys, and in some places better. We just can’t make as much at the same time.”

With Election Day scheduled for June 9, when do you vote?